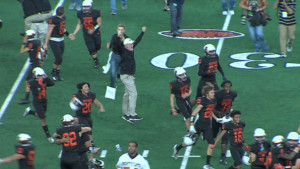 Another big honor for Refugio football.
The 2A Division I state champions, ranked third in the Dave Campbell’s Texas Football six-year program rankings, a deep dive into the strength of each Texas high school football program over the better part of the last decade. That is the Bobcats best ranking yet, up five spots from last year. The rankings are based on games won, winning percentage, number of 10-win seasons, state championships and state title game appearances. In the past six seasons, Refugio football has won two state titles and has made the state finals four times. The 2019 state champs had the first ever 16-0 record in Bobcat football history.

Multiple cold fronts coming through the Crossroads this week