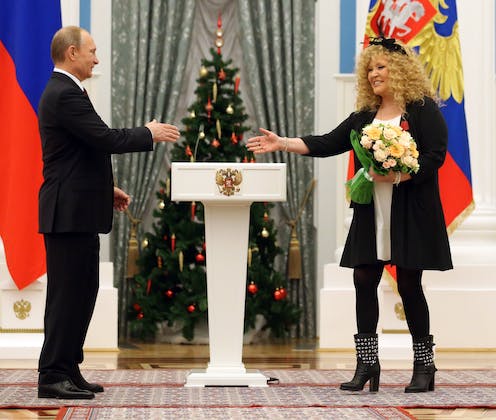 Russian President Vladimir Putin greets Alla Pugacheva during a 2014 awards ceremony honoring the pop singer with the Order For Merit to the Fatherland. Sasha Mordovets/Getty Images

Days before Russian President Vladimir Putin announced hasty referendums in the occupied regions of Ukraine and the conscription of Russian men, Russian singer Alla Pugacheva posted a message decrying the war on Instagram, where she commands 3.5 million followers.

As someone who has followed Pugacheva’s artistic career and written about her on- and off-stage personas, I knew this was no ordinary anti-war statement.

Despite the fact that Pugacheva is not well known outside of Russia, she is one of the top-selling music artists in the world and is arguably the most famous woman in Russia. In opinion polls over the past two decades, she’s routinely selected as one of the most popular Russians — sometimes appearing second only to Putin.

Her fan base encompasses all elements of Russian society, including millions of everyday Russians who, because they rely on Russian state media for information, are particularly susceptible to the Kremlin’s powerful propaganda machine.

In some ways, Pugacheva is a bridge to the past. Belonging to the same generation as Putin, she represents the stability and predictability of the Soviet era. Yet this isn’t the first time she’s leveraged her fame to challenge the political status quo.

A singer with many masks

Pugacheva burst onto the Soviet pop culture scene in 1975 with “Arlekino,” a song about a tragicomic clown. With the drama of a jester, she would alternate between laughter and tears, exuberant singing and pantomime.

Pugacheva’s first hit signaled different things to different audiences. The public was enthralled by the catchy tune and her stage presence. Meanwhile, the dissident intelligentsia interpreted it as a tribute to the plight of artists living in a totalitarian state.

Her versatility — and her ability to merge high culture with low culture — would become hallmarks of her art. Though her performing style could be clownish — even grotesque — she became one of the first Russian pop singers to use lyrics drawn from the texts of classical poets such as William Shakespeare and Boris Pasternak.

Her songs, which are a combination of pop, rock, folk and gypsy music, defy categorization, and her performances almost appear to be miniature plays in which Pugacheva — an excellent actor in her own right — demonstrates her gift for assuming a range of characters over the course of a single track.

Today, millions of Russians still listen and sing along to Pugacheva’s songs.

One of her most popular tracks, “Millions of Scarlet Roses,” tells the story of a painter who falls in love with an actress. He sells all his canvases and belongings to buy roses so he can transform the square in front of her window into a sea of roses.

“One who is in love, and seriously so / Will transform his whole life for you into flowers,” Pugacheva sings at the end of the refrain.

Yet if you listen closely enough to some of her songs, you’ll hear skillfully camouflaged political messages. Her hit song “Kings Can Do Anything” was often interpreted as a cleverly disguised political joke with an underlying message about the illusory power of political leaders.

She ignored advice not to sing this song at concerts given for government officials, and on several memorable occasions she even pointed out leading government ministers in the audience as she sang the provocative refrain: “Kings can do anything, kings can do anything at all! / But whatever you say, not a single king can marry someone he loves!”

As a cultural icon she also rebelled against patriarchal gender stereotypes. She is a loving mother and grandmother who is happily married to a man 27 years her junior. By continuing to perform into old age, she upends cultural notions of femininity and sexuality, challenging the traditional image of an asexual Russian “babushka” dedicated to her progeny. 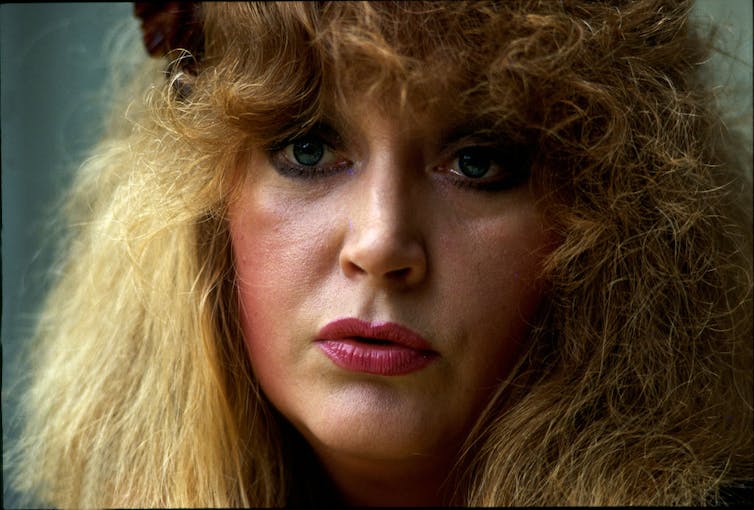 For four decades, Pugacheva has pushed up against cultural definitions of womanhood. Willy Spiller/RDB/ullstein bild via Getty Image

Pop tsarina vs. the ‘new tsar’

As “the tsarina of Russian pop,” Pugacheva has occasionally felt emboldened enough to express her opposition to a leader whom some call “Tsar Vladimir.”

In 2012, she became a spokesperson for the oligarch Mikhail Prokhorov in his unsuccessful presidential campaign against Putin, and in one TV interview she likened Putin to “the underworld boss of a criminal country.”

Despite her history of speaking out and maintaining a firm distance from the propaganda that imbued Soviet and Russian popular culture, her enduring popularity has compelled the Kremlin to repeatedly honor her in public.

Yet as war broke out in Ukraine, Pugacheva remained silent.

Pugacheva’s husband, comedian Maxim Galkin, however, was one of the first Russian celebrities who openly opposed the Russian invasion, and the couple left Russia with their young children soon after the war started. As the war dragged on, Galkin continued to ridicule the war and highlight the corruption of Putin’s regime on social media. The Kremlin eventually designated him a “foreign agent.”

In late August, Pugacheva unexpectedly returned to Moscow with her children but without her husband. When a journalist asked her about her plans, she teasingly answered, “I will put things in order. In my head and in your heads.”

On Sept. 18, 2022, she published the Instagram post. Addressing the Ministry of Justice of the Russian Federation, Pugacheva asked it to designate her a “foreign agent” in solidarity with her husband. She added that her husband is “an honest and decent human being, a true and incorruptible Russian patriot who wishes his homeland a flourishing and peaceful life, freedom of speech, and an end to the deaths of our boys for illusory goals that are making our country a pariah and worsening the life of our citizens.”

Reactions ranged from praise for her patriotic bravery to accusations of treason. Several Russian news agencies announced that Pugacheva’s statement discredited the Russian army and that she should be further investigated.

Time will tell whether Pugacheva’s message against the war will resonate with her millions of devoted fans.

Olga Partan does not work for, consult, own shares in or receive funding from any company or organization that would benefit from this article, and has disclosed no relevant affiliations beyond their academic appointment.