The early days of Airbnb, like the early days of the internet, were full of promise. Here was a way for travelers to see the world while meeting hosts and enjoying authentic experiences, all on a shoestring.

Yet this promise, like the promise of the internet itself, has been corrupted by greed, lack of competition and poor product management.

Yes, Airbnb is to travel what Facebook is to the internet. In a word: terrible.

The change was so slow and incremental that there was never one moment when Airbnb became so awful. But as unique mom-and-pop vacation rentals have given way to corporate property management behemoths, the charm of Airbnb has slowly eroded until all that’s left are unpredictable lodging experiences at high prices.

There are still times when booking an Airbnb remains the best option for travelers, just as checking a Facebook group is still the best way to get some information. But the cons of staying at Airbnb properties so often outweigh the pros that more travelers — even cheapskate backpackers — might reconsider its outsized role in the travel universe.

The cons of Airbnb

“Quirky” is a generous way to describe Airbnb properties. “Suffering from a complete lack of quality control or oversight” might be a less generous way. Setting aside safety concerns, which the platform spends millions of dollars to cover up according to a 2021 Bloomberg News report, staying at an Airbnb is often a game of roulette.

Listen, I enjoy adventurous travel experiences. And at the beginning of my time using Airbnb, I considered weird hosts and their oddball decoration choices part of the fun. But as hosting has become more corporatized, the horror stories have become less fun — and more depressing.

Checking into a house that smells like vomit doesn’t make for a very good story.

This points to a major difference between hotels and the current Airbnb: Hotels have a full-time staff ready to solve problems. Even the crummiest hotel will at least try to clear out a stench, whereas what you smell is what you get at many vacation rentals. Airbnb leaves it up to the individual hosts to resolve — or not resolve — the issues. (Don’t get me started on the fragrance-ridden laundry detergent favored by Airbnb hosts.)

I polled my NerdWallet colleagues on Slack, asking if any had Airbnb horror stories to share. The responses were swift:

My colleagues aren’t alone. A 2021 study of more than 125,000 Airbnb complaints on Twitter found that 72% of the issues were related to poor customer service and 22% were related to scams. The study was conducted by data scientist Asher Fergusson in partnership with researchers at the John Jay College of Criminal Justice and the University of Colorado, Colorado Springs School of Public Affairs.

The point is: Can you imagine any of these stories happening at a respectable hotel?

I spend much of my life ranking airlines and hotels. The competition is fierce, with top programs jostling one another for top spots from year to year. This breeds improved experiences for customers who rely on rankings like these to choose where to spend their travel dollars.

Airbnb, on the other hand, has no meaningful competition. Comparing it with rival Vrbo only reinforces this point because Vrbo somehow manages to be even worse than Airbnb in every respect except, possibly, search functionality. Even Facebook has to compete with TikTok and Snapchat, while Airbnb enjoys a near monopoly.

The platform, therefore, has little incentive to improve the experience for customers. Year after year, this lack of a competitive whet has dulled Airbnb’s edge.

There’s no way to find deals

Want to score a cheap flight? You can find innumerable tricks online, such as creating flight alerts and using miles. For hotels, it’s often best to book last-minute, while car rentals have their own tricks for securing deals.

What about finding deals on Airbnb?

Airbnb doesn’t have a loyalty program, which means there are no “points” to earn or promotional bonuses to stack. It leaves pricing up to hosts, which makes sense, but this approach means that finding a deal for any given trip requires a combination of intense searching and luck.

And here’s another issue: Airbnb doesn’t allow searching for listings via third-party sites like Google Hotel Search or Hopper. Basic sort functions that are helpful on these sites, like ordering results by the highest discount, simply aren’t an option. 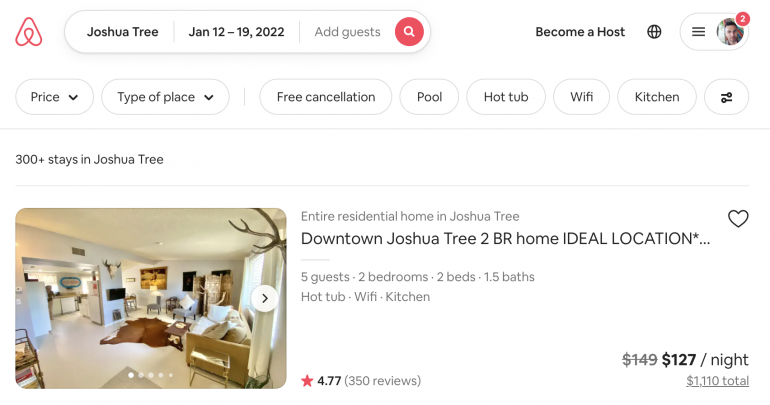 In fact, Airbnb’s own search tool doesn’t allow sorting at all, which means results are ordered by whatever profit-maximizing algorithm the vacation rental platform chooses.

This approach is annoyingly similar to Facebook’s. Want to view your news feed in chronological order? Too bad, you’re trapped in Facebook’s ecosystem and have to play by its rules.

The same customer-last logic applies to Airbnb’s search functionality. This setup makes deals, if they exist, unreasonably hard to find.

There was no single moment when Facebook became terrible. For a long time, it was a useful place to look at photos of your friends and maybe watch a funny video. Yet year after year and greedy decision after greedy decision, it became a wasteland.

Having dominated the competition and strong-armed local regulations, Airbnb has likewise begun to suffer from its own success. It was once an adventurous option for young travelers looking to see the world without going broke. Now it’s a commercialized, unregulated mess.

BREAKING NEWS: Victoria authorities are searching for someone who fled on foot

Victoria Police searching for driver who ran from crash scene