If you picture Santa Claus as plump and jolly and pulled by reindeer, you may have this poem to thank. Clement Clark Moore/New-York Historical Society

The poem “A Visit from St. Nicholas,” better known by its opening line “‘Twas the Night before Christmas,” has a special place among Christmas traditions, right alongside hot chocolate, caroling and bright lights. It has also inspired the modern image of Santa Claus as a jolly old man sporting red and a round belly.

But this poem has been steeped in controversy, and debate still looms over who the true author is. Traditionally, Clement C. Moore – a 19th-century scholar at the General Theological Seminary in New York, where I work as a reference librarian – has been credited with writing the poem in 1822 for his children. Every December, library staff shares our multiple copies of the poem in an exhibit to celebrate the holiday season.

No matter who wrote it, the poem is a fascinating object that has shaped Christmases past, present – and maybe yet to come.

Santa Claus had undergone many makeovers in the Western imagination by the time readers were introduced to “‘Twas the Night before Christmas.”

Some scholars argue that the idea of a magical being bringing gifts and good cheer can be traced all the way back to the Greek goddess Artemis. St. Nicholas, an early Christian bishop in what is now Turkey, was said to have destroyed a temple to Artemis, which he believed was idolatrous. Afterward, some of Artemis’ traits began showing up in legends as characteristics of St. Nicholas. He became known for generosity, such as giving children presents and gifting dowries to young women in need.

His feast day, Dec. 6, became a popular celebration in medieval Europe. By the modern era, images of St. Nick portrayed him as a tall, thin, stern man in a bishop’s hat who brought children both gifts and punishments. In German legend, he was accompanied by Krampus, a half-goat, half-demon creature that meted out a range of punishments to bad children, from mild to violent.

In Victorian Britain, Christmas became a festive holiday, with much feasting and drinking in addition to a religious celebration. In the early 19th century, Santa was sometimes depicted as a reveler from the lower classes – someone in need of charity, rather than a gift-giver himself.

As Christmas began to evolve into a family holiday, the image of Santa changed as well. Now, his jolliness came from the Christmas spirit, not feasting, and his rosy cheeks were the result of joy, not alcohol.

“‘Twas the Night before Christmas” was instrumental in crafting the modern American version of Santa Claus. The poem describes St. Nicholas as “dressed all in fur, from his head to his foot,” with twinkling eyes, rosy cheeks, a snow white beard and a round belly. Throughout the poem, Santa is depicted as a jolly elf bringing joy with his reindeer-led sleigh to both children and adults.

Thomas Nast, a Civil War-era cartoonist with the magazine Harper’s Weekly, created the enduring image of Santa Claus in a series of 33 drawings published between 1863 and 1886. The first of these drawings is inspired by the poem’s depiction of Santa carrying a sack full of presents with his sled pulled by reindeer.

Our library holds a copy of Nast’s book “Christmas Drawings for the Human Race,” containing his illustrations for “‘Twas the Night Before Christmas.” The introduction to our copy is written by Nast’s grandson, Thomas Nast St. Hill, who inscribed and donated it to the library in 1971. In some images, Nast used Santa to send a political message – such as one illustration that depicts him with toys related to battle, showing his support for Union soldiers. 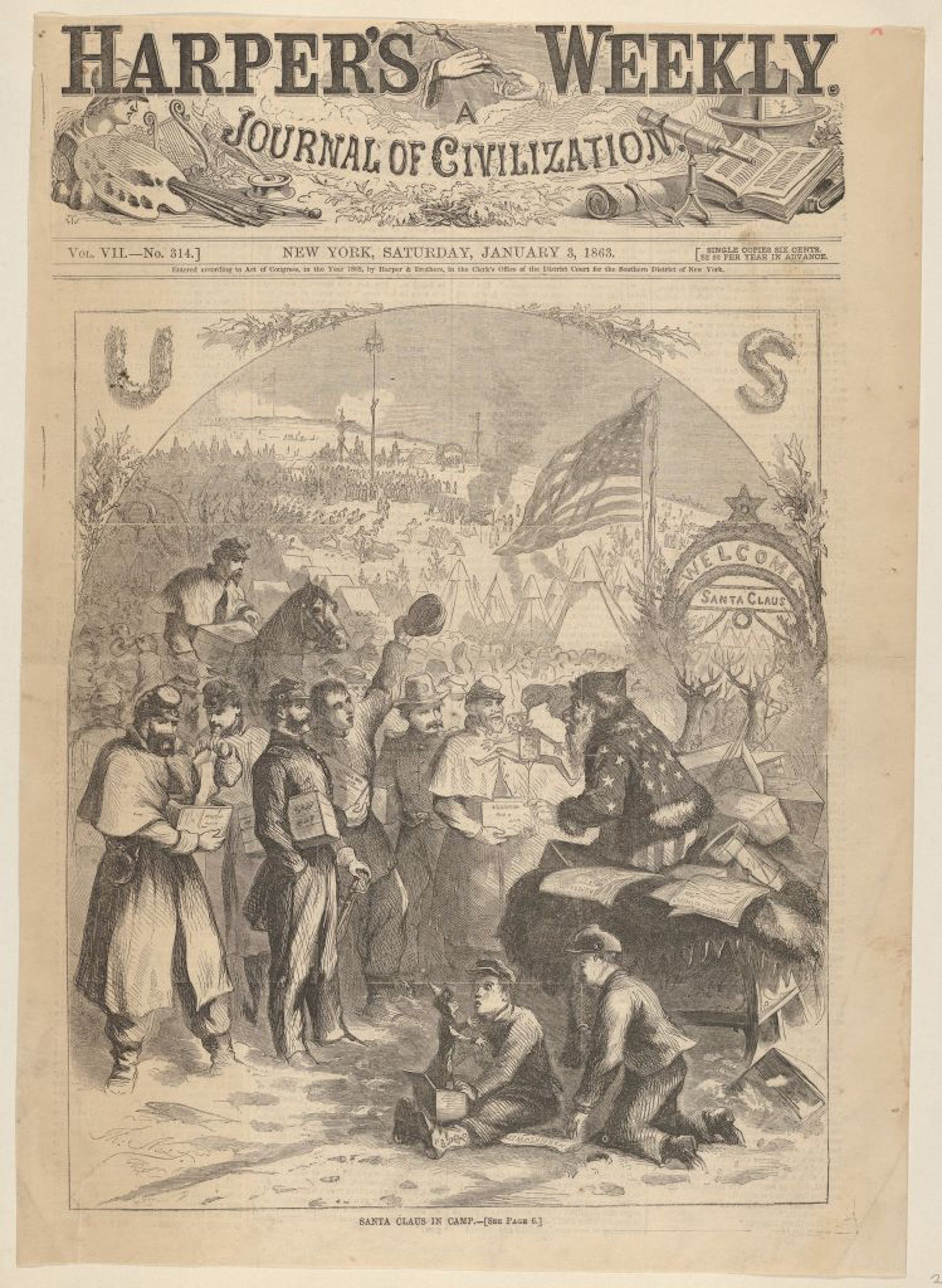 Thomas Nast’s cartoons, such as this one during the Civil War, helped shape Americans’ modern image of St. Nick. Sepia Times/Universal Images Group via Getty Images

Two hundred years after the poem debuted, one fundamental question remains: Who is its true author?

The poem first appeared anonymously in a New York newspaper, the Troy Sentinel, on Dec, 23, 1823, and was reprinted many times. The New York Book of Poetry cited Moore, the 19th-century biblical scholar, as the author in 1837, and in 1844 he included it in his book of poems. Several years after the poem’s publication in the Sentinel, editor Orville Holley wrote that the author was “by birth and residence [belonging] to the city of New York, and that he is a gentleman of more merit as a scholar and writer than many of more noisy pretensions.” That’s an apt description of Moore, according to Niels Sonne, a librarian at General Theological Seminary in the 20th century who published an article about the authorship controversy. Moore was officially cited as the author in The New York Book of Poetry in 1837.

But the descendants of Henry Livingston Jr., a poet and farmer from an influential New York family, argue that he wrote the famous poem as early as 1808 and was never properly credited. Relatives of Livingston have claimed that his manuscript was brought to Wisconsin, where it was destroyed in a fire in 1847. His defenders point to similarities with other poetry and witty satires he wrote, and argue that his fun personality was much more in keeping with “A Visit from St. Nicholas” than Moore’s. His grandson, William Sturgus Thomas, spent years collecting evidence in his grandfather’s favor, and his papers are housed at the New York Historical Society.

Every December, the Seminary library displays all the original copies of the poem we own in addition to more modern retellings and illustrations. Our copy of Moore’s 1844 “Poems” has one significant detail: it’s signed by Moore to the Reverend Samuel Seabury, who was a professor at General Theological Seminary and also the grandson of the first Episcopal American bishop, Samuel Seabury. The inscription says: “To the Reverend Dr. Seabury, with the respect of his friend the author, July 1844.”

The library also owns Moore’s rare follow-up work, titled “The Night after Christmas,” which was published after his death in 1863. In this version, the children are visited by their doctor after having too many treats delivered by Santa – and the physician shares some similarities with Santa himself:

“His eyes how they twinkled! Had the doctor got merry? His cheeks looked like Port and his breath smelt of Sherry…

The ATS is a funding partner of The Conversation U.S.

Melissa Chim does not work for, consult, own shares in or receive funding from any company or organisation that would benefit from this article, and has disclosed no relevant affiliations beyond their academic appointment.

Over 140,000 readers rely on The Conversation’s newsletters to understand the world. Sign up today.