Is Ukrainian a language or a dialect? That depends on whom you ask and how the war ends

Since the start of the war in Ukraine, the number of people studying Ukrainian on Duolingo, a language learning website and mobile app, has increased by more than 500%.

Most of those who are taking up Ukrainian are probably unaware that there is a long-running controversy about this particular form of speech. One side views Russians and Ukrainians as “one people,” and the opposing side does not.

The former claim that Ukrainian is just a dialect of Russian, while the latter argue that it is a separate language. Who’s correct?

Unfortunately, there isn’t a clear answer. The difference between a language and a dialect depends upon whom you ask.

By this definition, Czech and Slovak could be viewed as dialects of the same language. The same goes for Indonesian and Malay.

Some spoken forms look quite different when pen is put to paper. For instance, Serbian is written with a variation of the Cyrillic alphabet, like Russian, while Croatian uses a form of the Latin alphabet, like English. Nonetheless, many linguists would consider Serbian and Croatian to be dialects of the same language, because it’s the understandability of spoken forms that generally counts.

Humans have been talking for a very long time, but we’ve only been writing things down for a few millennia. Plus, of the roughly 7,000 known living languages only about 4,000 have a writing system.

Ukrainian President Volodymyr Zelenskyy has addressed the Russian people in the Russian language, while delivering other speeches in Ukrainian and English.

For political scientists, the difference between a language and a dialect is not based on mutual understandability, but rather politics. For example, Hindi and Urdu are separate languages because the governments of India and Pakistan say they are, even though the colloquially spoken forms of the two varieties are strikingly similar.

Max Weinreich, a Yiddish scholar, popularized the idea that “a language is a dialect with an army and navy.” In other words, a government can promote the view that a dialect is a separate language even if it isn’t in linguistic terms.

Moldova, for instance, argues that Moldovan is a separate language, even though it is nearly identical to Romanian. Although Romania has gotten upset about such linguistic rebranding, according to Article 13 of the Moldovan Constitution, the country’s official language is Moldovan, and not Romanian. Thus the two are separate languages — at least politically. 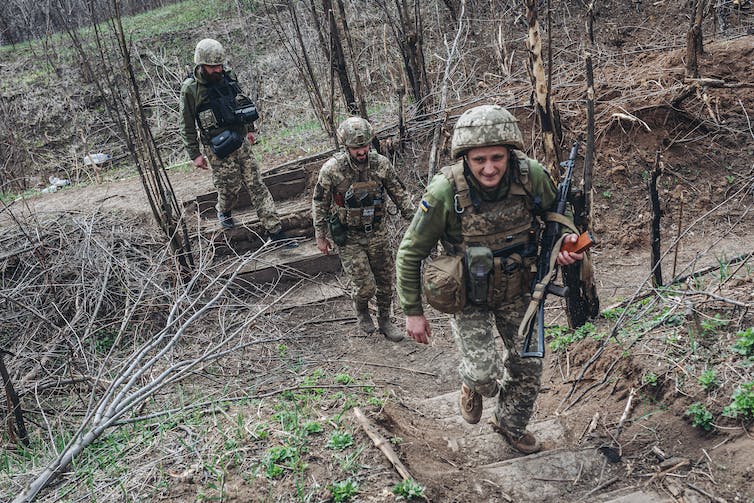 Ukrainian soldiers move through a combat zone in the Donbas region of Ukraine. Diego Herrera Carcedo/Anadolu Agency via Getty Images

Bestowing official status on a particular spoken form not only encourages its use in government, including the courts, but it also usually means that a spoken form will be taught in schools, thereby ensuring that future generations share a common language — even if it was invented for nationalistic purposes.

Just as a dialect with an army and navy can be considered its own language, a language with an army and a navy can call other languages mere dialects. For example, the official language of the People’s Republic of China is Standard Chinese, which is often shortened to simply “Chinese” and is sometimes — contentiously — referred to as Mandarin. However, this is not the only form of speech that can be heard throughout the country.

Cantonese is widely spoken in and around Hong Kong, yet it is often treated as a dialect of “Chinese.” However, spoken Mandarin and Cantonese are not mutually understandable. As such, in linguistic terms, these two forms of speech would not be considered dialects of a single language, but rather separate languages.

In order to strengthen the power of the central government against separatist sentiment, the Chinese government has long promoted a language unification agenda. The intent is both to create a common way of communicating for the country but also to minimize the linguistic and cultural differences that exist among different communities. To help spread the adoption of Standard Chinese, as defined by the government, television and radio professionals are subject to strict requirements and can even be fined for using incorrect pronunciation.

Throughout China, local forms of speech are being phased out as mediums of instruction in schools in favor of Mandarin. Many of these forms are now declining, and some are at risk of going extinct. Such efforts do not necessarily mean that these types of speech aren’t “real languages” in the linguistic sense.

But politically, the difference between a language and a dialect is whatever China says it is. This is even reflected at the international level, as many organizations, such as the United Nations, recognize “Chinese” as being the form of speech standardized and promoted by the Chinese government.

So, is Ukrainian a dialect of Russian or a separate language? Linguistically, Ukrainian and Russian are about as different as French and Portuguese. Although French and Portuguese both descend from Latin, they’ve now diverged enough to make mutual understanding difficult. Similarly, while both Ukrainian and Russian share a common ancestor, their present-day spoken forms are now different enough that there’s a strong linguistic case for them to be considered separate languages.

If, however, Russia ends up controlling the entirety of Ukraine, thereby finishing the process that it began in 2014 with its annexation of Crimea, then Russia could promote the view that Ukrainian is but a mere dialect of Russian, to reinforce Ukraine’s diminished status as a part of Russia.

In short, not only is Ukraine’s territorial integrity at risk, but so is the independence of a unique and distinct cultural community.

[You’re smart and curious about the world. So are The Conversation’s authors and editors. You can read us daily by subscribing to our newsletter.]

Joshua Holzer does not work for, consult, own shares in or receive funding from any company or organization that would benefit from this article, and has disclosed no relevant affiliations beyond their academic appointment.

FedEx driver is arrested in the kidnapping and killing of a 7-year-old girl who went missing outside her home this week, police say