How to Book a Flight That (Likely) Won’t Get Canceled

Flight delays and cancellations are uncomfortably frequent right now. In fact, the on-time arrivals rate thus far in 2022 among U.S. airports hasn’t been this low since 2014, according to the Bureau of Transportation Statistics.

So how do you improve your odds of traveling on one of the three-quarters of flights that arrives in good time? And how have flight delays and cancelations become so prevalent?

Why are so many flights being canceled?

There are several reasons flights are being canceled, and there’s currently a lot of finger-pointing, too.

How to improve your chances of avoiding airline cancellations 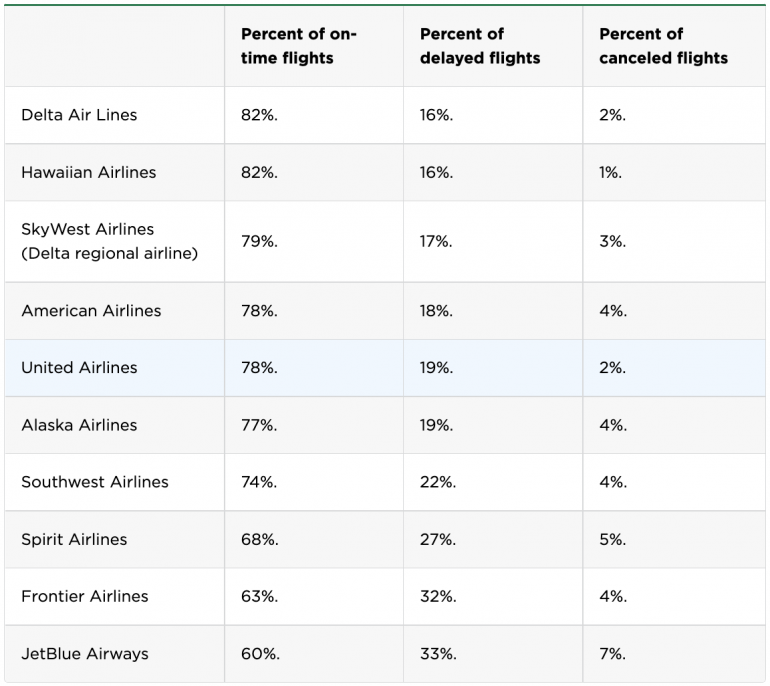 If timeliness is a priority, consider booking Delta or Hawaiian, which arrived on time 82% of the time. Skip JetBlue, which only landed on schedule 60% of the time.

Air carrier problems — meaning the issue was due to circumstances within the airline’s control, such as maintenance, cleaning, baggage loading or fueling delays — were the top cause of late arrivals for the first four months of 2022, accounting for nearly 8% of delays.

Book the earliest flight in the day

The second most common cause of delays: The aircraft arrived late from its previous destination. Nearly 7% of flights in the first four months of 2022 were delayed for this reason.

It’s not uncommon for the aircraft flying an evening flight to have already made a couple of trips earlier in the day. If one of the earlier flights was delayed, there’d likely be a snowball effect.

For example, the aircraft’s first flight of the day may have been fine, but if the second flight had maintenance problems and arrived late, then the third flight would probably run behind schedule, which could in turn affect any subsequent flights. You can try to avoid the snowball effect by booking the day’s first flight.

Sadly, it doesn’t do you much good for the first leg of your flight to arrive on schedule if the second leg is delayed. Who wants to sit twiddling their thumbs in a layover city or airport?

It’s potentially even worse if the second leg of your journey departs on time, but you miss it because your incoming flight was delayed.

Mitigate this risk by booking nonstop flights. Even if the airfare is more expensive, it could be worth it to avoid the headache of missing a connecting flight.

If a layover is unavoidable, it’s almost always better to book the entire journey with the same airline on a single itinerary, as opposed to booking with separate airlines for each leg of the trip. That way, if your first flight ends up being delayed, the airline may work with you to adjust your connecting flight, provided that the delay was its fault. If you book the two legs of your trip on different airlines, you likely won’t get that kind of consideration.

Choose an airline with multiple flights per day

If your flight is canceled, most airlines will rebook you on their next flight with available space for no additional charge, according to the U.S. Department of Transportation. If your airline runs multiple flights on the same route per day, you may only have to wait a few hours. Sure, having to take a later flight would be annoying, but it likely wouldn’t ruin your trip.

As an example, let’s say you’re flying from Los Angeles to Las Vegas, a route that United usually flies four times per day. But you choose to take JetBlue, which typically only flies that route two times per day. If your ticket is for the single afternoon flight — and it then gets canceled — there’s a good chance you won’t be able to get to Vegas that day, period.

And no, you likely won’t be able to persuade JetBlue to pay for one of United’s remaining flights, as there are no federal regulations requiring airlines to put you on another airline’s flight or reimburse you for another airline’s tickets.

What to do after booking

Even if you follow our advice to decrease the chances of your flight getting canceled (say, by booking the first, nonstop flight of the day on Delta — one of the most on-time airlines), you could still hit a patch of bad luck. These next steps might save you some headaches:

To stay informed, opt-in to receiving flight status updates by email, text or push notification, a feature of some airline apps. Or, simply plug your flight number into a search engine to get real-time flight data.

If your flight is canceled, you might decide you’re better off staying put and booking a new flight from home rather than scrambling to do so at the airport. If your flight is delayed, you might simply head to the airport at a more leisurely pace. Just be sure to keep an eye on the flight status, because a flight marked delayed can sometimes revert back to being on time.

Don’t pack a checked bag (but do pack your patience)

If your initial flight gets canceled and you have to book a different airline’s last-minute flight, it might be difficult to retrieve a suitcase that’s still in the first airline’s hands. Traveling with a carry-on lets you move more nimbly between flights.

There is one thing you can pack that won’t take up any luggage space: patience. The gate agent likely isn’t responsible for the delay, so be kind — and they might be more likely to help book you on another flight.

If your flight is delayed or canceled, know what compensation you’re entitled to. Sadly, it’s not much when it comes to delays; there are no federal laws requiring airlines to provide passengers with compensation for delayed flights.

Some airlines choose to offer meal vouchers or hotels to stranded passengers, but that’s uncommon among budget airlines. Airlines are not required to reimburse you for non-air expenses, such as a prepaid hotel room or a missed cruise departure.

For canceled flights where you opt not to be rebooked on another flight, you are entitled to a refund of the airfare, even if you bought nonrefundable tickets.

Have a backup plan

Given that airlines aren’t legally required to do much to help you, understand how to help yourself.

On-time arrival rates haven’t been this bad since 2014. Unless you’ve got a crystal ball, there’s no way to guarantee you won’t book a flight that gets delayed. But even without one, a thoughtful booking strategy can better ensure you get to your destination on schedule.

The article How to Book a Flight That (Likely) Won’t Get Canceled originally appeared on NerdWallet.

Scaffold worker falls to his death in Ingleside

US 59 to close completely on Thursday through Friday morning