Canceled TV Shows 2021: Which of Your Favorite Series Are Coming to an End?

2021 has begun, and it’s filled with plenty of shows to keep you busy — and there are more to come with some in the works.

But TV series can’t last forever, and there are only so many time slots for networks to fill, so eventually, all must come to an end (planned or otherwise). Below is the list of all the TV shows you’ll be saying goodbye to this year. (Stay tuned as this list is continuously updated.)

The Walking Dead: World Beyond, 2 seasons 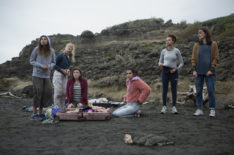 Renewed TV Shows 2021: Find Out Which Series Will Return for Another Season

Check out our handy list of renewals across cable, premium channels, and streaming services.

Keeping Up With the Kardashians, 20 seasons

Dead to Me, 3 seasons

Our Favorite Shows of 2020 (Expect the Unexpected)

These shows, which helped us forget the world outside our windows, did some pretty heavy lifting in a difficult year.

The Haves and the Have Nots, 8 seasons

A word from Superintendent Quintin Shepherd of the Victoria ISD