You’re rushing to catch a flight with a suitcase in one hand and a baby, beverage or handbag (or perhaps all three) in another. One of the last things you might want is to rummage through your things in search of your driver’s license or state ID to flash to the Transportation Security Administration agent.

But for residents of Arizona flying out of Phoenix Sky Harbor International Airport, that process might be a bit easier — as long as they also have an Apple Watch or iPhone. Apple on Wednesday launched the first driver’s license and state ID in its Apple Wallet. That could be useful for travelers, as they’ll be able to add their driver’s license or state ID to Wallet, then they won’t have to present a physical copy to security agents.

For now, the only airport accepting Apple Wallet versions of identification is Phoenix Sky Harbor International Airport, and even there, it is only available at select TSA security checkpoints. But Apple has announced that it is working with 11 other states and Puerto Rico to offer this feature.

The move signals a future of travel where important documentation can be digitally stored and accessed in one place by way of your smartphone or smartwatch. These days, devices are capable of working as digital hotel room keys. They serve as digital queues for everything from airport security to theme park rides. They enable you to order room service and unlock rental cars. And now, they enable you to move through airport security without needing a physical ID card. 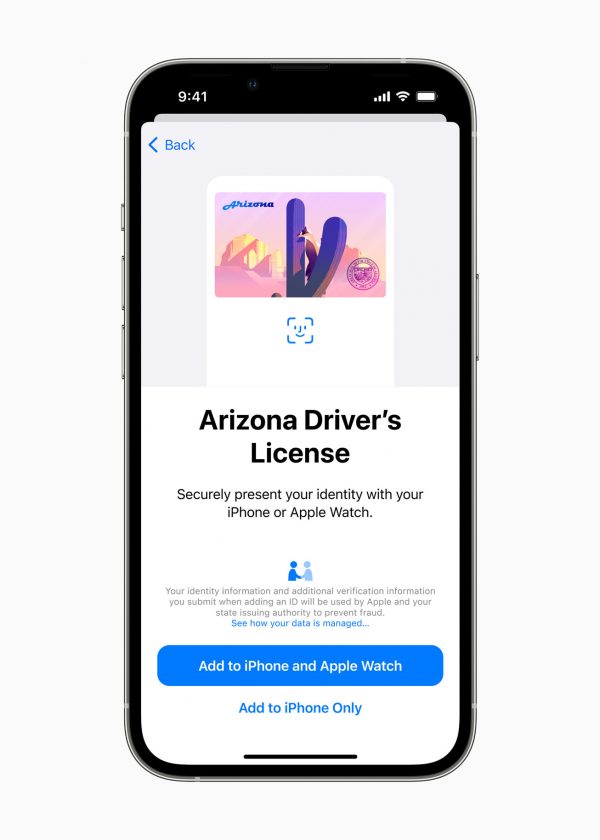 How does the new driver’s license feature in Apple Wallet work at airport security?

To use Apple’s new ID feature, Arizona residents need to enter the Wallet app on their Apple device and select “Driver’s License or State ID.” From there, Apple presents a series of on-screen instructions to start the setup and verification process, which includes having to take a selfie and scan the front and back of their driver’s license or state ID card. Measures to prevent fraud include prompting users to complete a series of facial and head movements during the setup process.

The state of Arizona (neither Apple nor Phoenix Sky Harbor Airport) is responsible for verifying and approving requests to add a driver’s license or state ID to Wallet.

At a participating airport security checkpoint, users tap their iPhone or Apple Watch at an identity reader. From there, the traveler’s profile information is presented digitally through encrypted communication directly between their device and the airport’s identity reader. Travelers will then consent through Face or Touch ID — all without needing to show a physical ID card. The TSA will capture a picture of the traveler for its verification purposes. 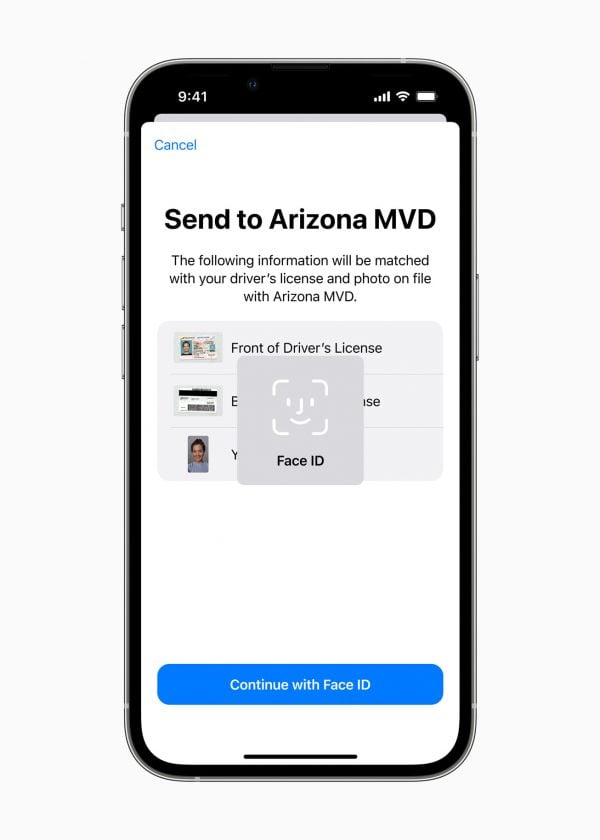 Is adding your ID card to Apple Wallet safe?

Losing your device might actually be safer than losing your physical ID. For starters, you can use Apple’s Find My app to either lock your device or help locate it (or both). That app also allows users to opt to remotely erase their device. Additionally, biometric authentication using Face ID and Touch ID is there to help ensure that only the person who added the ID to the device can use it.

Traveling with a physical wallet filled with credit cards, room keys and ID cards means one more thing to worry about leaving behind in an airplane’s seatback pocket. It’s one more thing that a pickpocket might steal, and it’s an opportunity for your virtual money to be subject to a credit card skimmer.

Sure, virtual versions of those cards are certainly subject to safety challenges, like data breaches. But should you simply forget to pack your wallet (or prefer to leave it in the hotel safe while you’re out exploring), the latest Apple Wallet news suggests that it will become increasingly possible to travel without a purse or pocketbook.

How Apple Wallet is disrupting travel

Over the past few years, Apple Wallet has disrupted multiple aspects of travel. Many retailers allow you to pay in stores with linked debit or credit cards. Increasingly more public transit agencies allow you to store tickets on Apple Wallet, as do many movie theaters, stadiums and concert venues. And in December 2021, Hyatt became the first hotel brand to offer room keys in Apple Wallet, allowing customers to tap their iPhone or Apple Watch to unlock rooms at participating hotels.

The Apple Wallet ID feature is only available to Arizona residents for now, but Apple says it has plans to add the feature for residents of Colorado, Hawaii, Mississippi, Ohio and Puerto Rico. That follows an announcement in September 2021 that the feature would also come to residents of Connecticut, Georgia, Iowa, Kentucky, Maryland, Oklahoma and Utah.

And while even Arizona residents likely still need to travel with a physical identification card to fly out of other airports or to enter certain establishments, the proliferation of virtual cards could eliminate that in the future.

On the whole, features like Apple Wallet have removed some headaches that come with fumbling through cards and keys as you navigate your vacation. But there are trade-offs — and they’ll inevitably force one thing you more than likely will have to pack: a portable phone charger.