50% Of Taxpayers Worry Tax Refunds Will Be Smaller This Year

The 2022 tax filing season has begun, and a stretched-thin IRS has already warned Americans that they should be patient as it processes returns.

But a new survey finds that many taxpayers are already feeling pessimistic about their upcoming experience this tax season—especially parents.

More than 50% of respondents of a YouGov/Forbes Advisor poll of 1,200 Americans expect their tax refund to be lower this year due to pandemic aid programs.

And only 42% of Americans with the lowest household incomes (under $50,000) anticipate getting a refund, despite the fact that 77% of individual taxpayers received a refund last year.

Confusion about claiming pandemic aid like the expanded child tax credit may be driving much of the uncertainty among taxpayers, says Laura Scherler, senior director of economic mobility and corporate solutions at United Way.

Scherler says that filing a tax return is confusing for many, and it generates a lot of anxiety. “It’s generally because [taxpayers] are afraid to make a mistake. I think people are afraid of a ‘gotcha’ on the back end—‘What if I make a mistake and end up owing a bunch of money that I can’t pay?’”

Here’s what Americans are worrying about as they gather documents and prepare to file their 2021 federal income tax returns—and what you can do if you’re stressed about your return.

The YouGov/Forbes Advisor survey found that 38% of parents or guardians of children under 18 expect their refund to be lower than last year’s.

This could be because The American Rescue Plan Act expanded the child tax credit for the 2021 tax year, making it available in monthly installments for the first time in 2021. The first round of monthly payments in July 2021 was delivered to 35 million households. 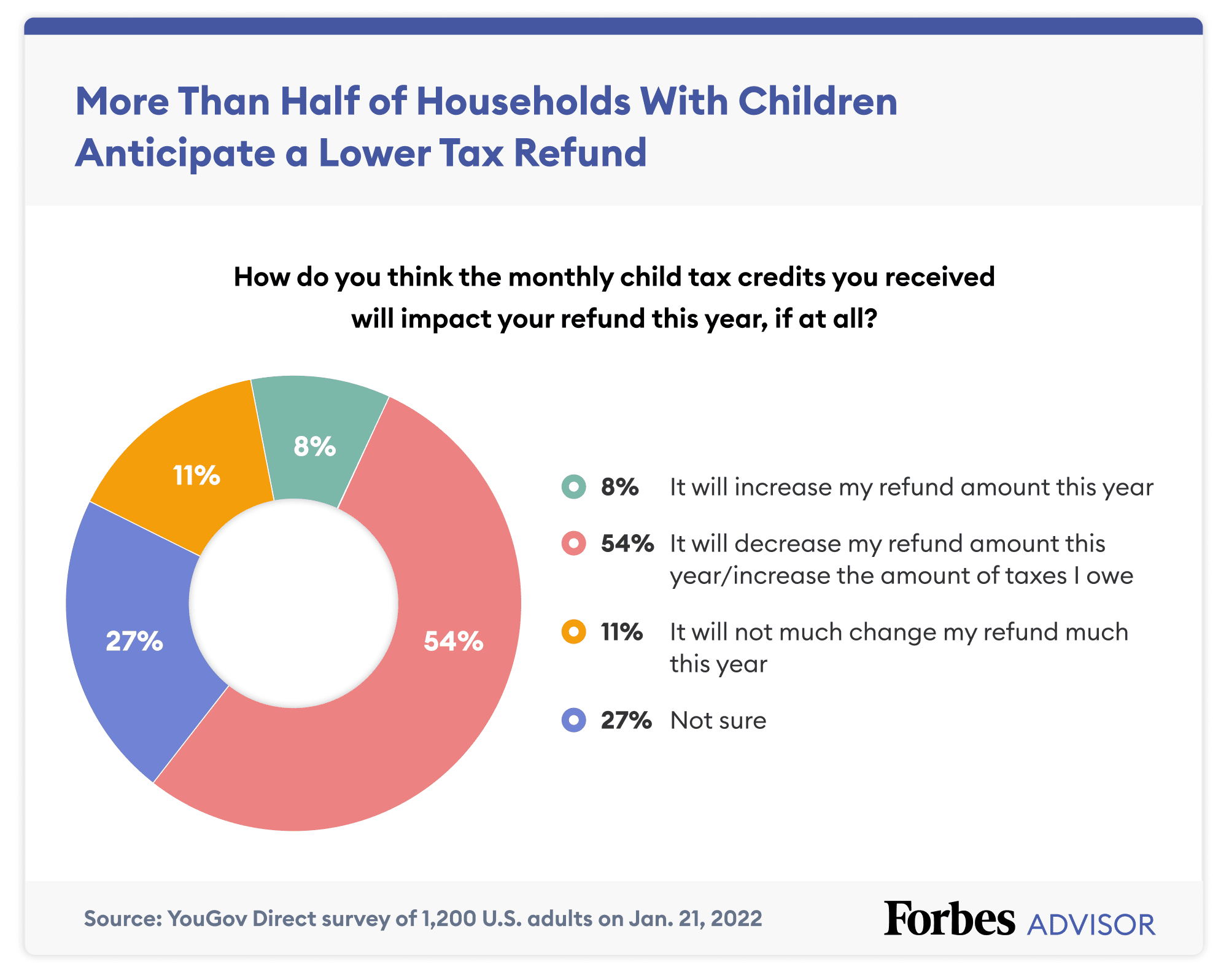 It’s still early in tax season, and it’s not immediately clear how the monthly CTC payments will affect tax refunds—but for some families, it may lead to a lower refund than what they’re used to getting.

“If it wasn’t immediately clear to people that the CTC was essentially an advance on the credit they would receive when they file their taxes, they may be shocked when that credit is reduced,” Scherler says, explaining that taxpayers may not associate the monthly payments with their taxes because the credit was distributed outside of the tax season.

Some taxpayers may also be anxious about 2021 income fluctuations that could impact their CTC eligibility, says Alton Bell II, principal accountant at Bell Tax Accountants & Advisors. But the expanded credit includes a safe harbor provision for certain income levels, so that if you get overpaid, you won’t have to pay back that part of the credit. That income threshold is generally $40,000 for single filers and $60,000 for joint filers.

More than two-thirds of Americans with household incomes under $50,000 don’t expect a refund this year or are unsure if they’ll get one. But households with lower incomes are most likely to benefit from expanded tax credits like the child tax credit.

Scherler says employment volatility for workers in lower-earning roles last year, such as layoffs, furloughs, or hour reductions, may have some taxpayers expecting a smaller refund this year.

“They may be assuming that because they didn’t work as much, they’re not going to get as big of a refund,” she says. “Generally, the inverse is true: If you work less and your income is lower, you’re in a lower tax bracket, which means you owe less.”

Alongside the CTC, the Earned Income Tax Credit (EITC) also got a boost for the 2021 tax year, to include low-income working adults as young as 19 and older than 65 rather than limiting the credit to childless workers aged 25 to 65.

The maximum EITC for a qualifying taxpayer without children increased from $543 to $1,502, while a household with three or more children could receive a maximum credit of $6,728. The credit is fully refundable.

These tax credits are some of the nation’s most prominent anti-poverty programs and the temporary expansions have shown signs of buoying many Americans in the later stages of the Covid-19 pandemic.

Households who had previously struggled to get enough food on the table increased spending on food after receiving child tax credit payments, according to a November report from the Financial Health Network. In addition, recipients who had difficulty paying for health care spent more on their health care needs—particularly on medication and prescription drugs—after receiving payments. 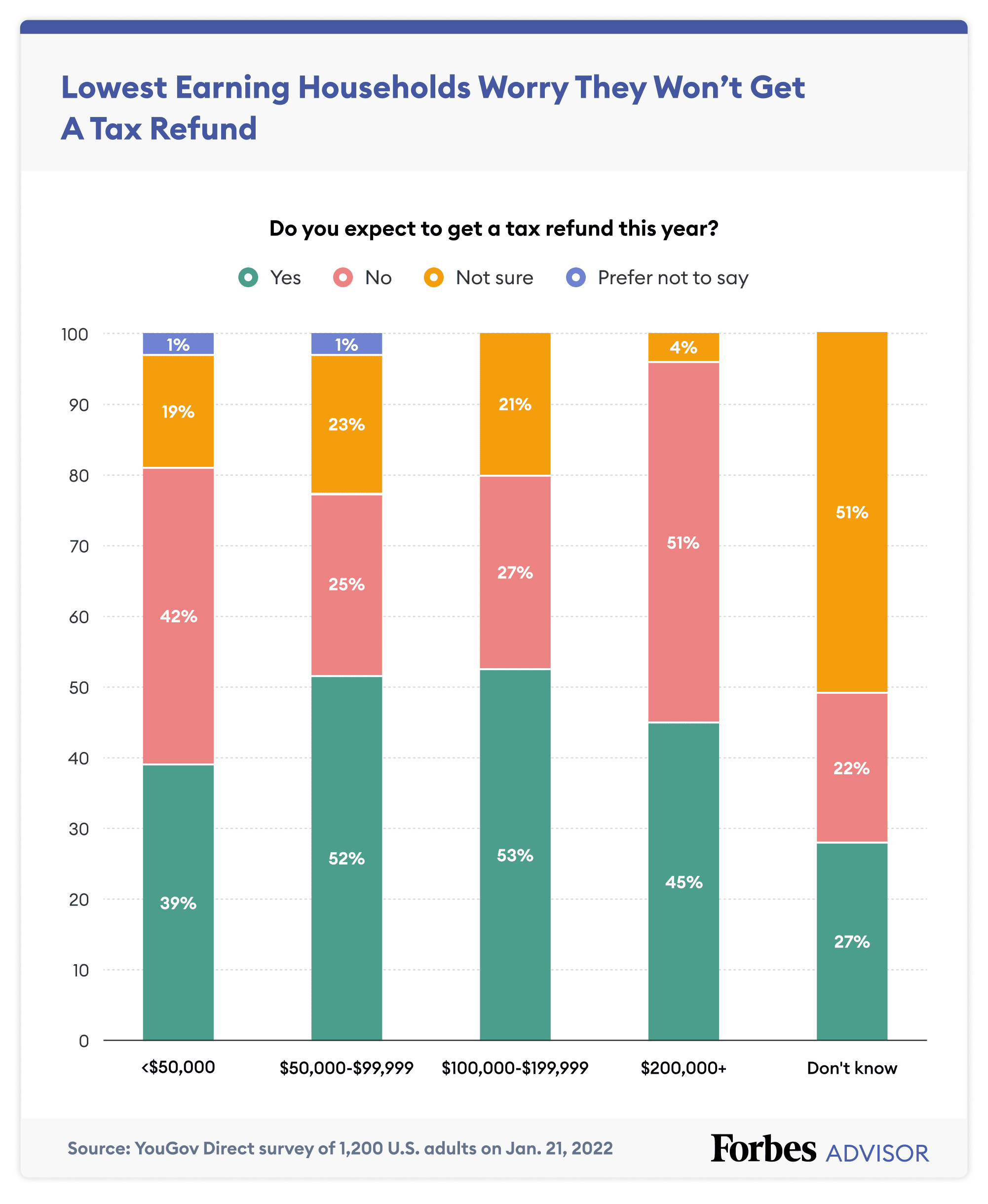 Overall, one in five surveyed expect federal aid programs from the pandemic to make the process of preparing and filing their taxes harder this year than last year.

Among parents and guardians of children under 18, 30%—nearly one in three—think the process of preparing and filing their taxes will be harder this year due to pandemic aid programs like the expanded child tax credit.

While this is higher than overall respondents (19% expect pandemic aid programs to make taxes more difficult), it marks an improvement over last year, perhaps indicating that Americans have become more comfortable with the added complications to their returns.

In 2021, almost 40% of Americans expected preparing and filing taxes to be more difficult due to receiving stimulus checks, among other pandemic-driven changes.

3 Tips To Make It Through This Tax Season

The IRS reminds taxpayers, particularly those who use paper returns, can expect delays this tax-filing season. Meanwhile, the agency continues to work through a hefty backlog of returns from prior tax years. Here are tips on how to survive the worst tax season can throw at you.

If you’re anxious to get your expected refund, you should aim to file your tax return on or before Feb. 15. While most tax returns are processed immediately upon filing, for taxpayers receiving the CTC and EITC, the IRS won’t issue those refunds until mid-February.

The IRS encourages taxpayers to file as early as possible to avoid giving fraudsters any opportunity to file a tax return (and potentially get a refund) in your name. And it may give you peace of mind as you hear warnings about delays.

“Last year, many taxpayers either experienced delays with their tax return or knew of someone who did,” Bell says. “So, with tax season back in full swing, there is a feeling of déjà vu that I am hearing from clients and taxpayers.”

Bell also advises taxpayers to get organized to make sure you have all the documents and information you need to file an accurate tax return. Potential inaccuracies can lead to your return getting reviewed manually, which can lead to delays in processing.

If you’re unsure of details you may need to record on your tax return, such as the amount of your stimulus check or child tax credit payments, set up an online account on the IRS website. This feature allows you to access some tax forms, check payment balances, set up payment arrangements and view prior-year tax returns.

2. File a Tax Return, Even If You’re a Nonfiler

Scherler recommends filing a tax return even if you’re not required to because your income is too low. Doing so can make it easier to access future benefits that might get sent automatically to people who have information on file with the IRS—for instance, CTC payments or the stimulus payments of 2020 and 2021.

It’s to your benefit to file a return to get easier access to monetary programs you’re eligible to receive —“and there are free ways to do that,” Scherler adds.

While the IRS has asked taxpayers to avoid calling the agency for information and assistance, there are plenty of free resources to help you prepare and file your tax return.

Methodology: The survey is based on the interviews of 1,200 adults aged 18 and over in the United States. The survey was carried through YouGov Direct on January 21, 2022 between 1:17p.m. and 8:55 p.m EST. US results are weighted by age, gender, education level, political affiliation, and ethnicity. Results are nationally representative of adults in the United States. The margin of error is 2.9% for the overall sample.